Outside the Box Product Management

Where is the box? In the world or in our minds?

The day-to-day life of a PM sometimes feels like running in a steeplechase race. At times the track is clear, the race is fair, you’re nailing it. Other days the steeplechases are everywhere, and they seem to be running towards you!

Big and small issues that cause concern, that don’t perform as expected, that make someone in the company — be it the management, the sales team, the marketing group, the CEO’s wife (or husband!) — unhappy, and it’s up to you the PM to come up with a solution, propose a change, initiate something that will have an impact for the better.

Problem-solving and creative thinking are parts of the PM role. Parts of the job description. The ability to zoom in on an issue and improve it. But how does one develop these qualities? What does it really mean, to be a creative problem solver? Can it be learned or trained?

I used to think that my natural pessimism is a good friend, supporting me in becoming a better PM. I tend to see problems everywhere, and I was not surprised when problems did occur.

A good dose of suspicion, for the least, does go a long way. But that is not all of it. Our ability to come up with a creative solution relies on how we perceive the problem. And that goes both ways. The way we perceive a problem tends to limit our ability to see a solution for it. In order to solve a problem, one needs to identify the problem correctly.

There’s homework after the first session of the MBSR course (Mindfulness-based stress reduction 8-week training course). Participants are tasked with trying to solve the nine-dot problem. In the following session, they will report their experience while working with the problem and the solution they found for it, or not.

The nine-dot problem goes like this: see the illustration below? The task is to connect up all the dots by making four straight lines without lifting the pencil and without retracing along any line.
Before continuing to read, spend five to ten minutes trying to solve this puzzle. 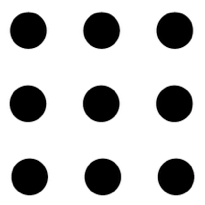 Subscribe to our newsletter. No spam. Product goodies only.